For Spoon Man, Assisted Living a Perfect Place to Live

As I mentioned in my blog that was posted last week, one of the biggest fears I so often hear from individuals considering a move to assisted living is loss of independence.

As we celebrate Independence Day this month, I am highlighting stories and comments from residents of the assisted living communities that Gardant manages about the concern.

My blog last week focused on Jewell, who found that moving to an affordable assisted living community that Gardant manages in southern Illinois provided more rather than less independence.

My blog this week highlights a resident of Heritage Wood of Minooka, an affordable assisted living community that Gardant manages in a town located along I-80 west of Joliet, Illinois.

The Spoon Man Story
For Steve Salopek, music gives soul to the universe, wings to the mind, flight to the imagination, and life to everything. 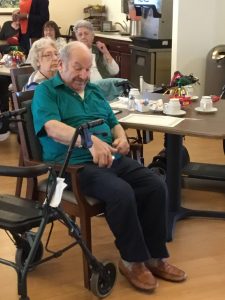 The resident of Heritage Woods of Minooka has played the spoons since he was young.

He used to play in a band. It was something that gave him such pride.

But as his health deteriorated so did his opportunities to do what he enjoyed doing so much.

When he moved into Heritage Woods of Minooka, he wasn’t sure if he would ever again be able to play the spoons.

The situation changed when he met the affordable assisted living community’s resident services director for the first time. He asked her if he could play the spoons for residents; all he needed was some polka music.

She provided him with the opportunity to play his music in his new home.

A short time later, the community hosted a party for residents that featured the polka music of local entertainer Eddie Korsa Jr.

Steve was ecstatic. Growing up, Steve played with Eddie’s father.

The day Eddie came into entertain, he saw Steve and remembered Steve and his father playing together. He was so happy that the “Spoon Man” had found the perfect place to live.

Steve, one of the residents at our community, loves to play along with his spoons during piano melodies!

Posted by Heritage Woods of Minooka on Monday, February 11, 2019