At Heritage Woods, your affordable assisted lifestyle community in Flora, Illinois, your new home awaits you

Heritage Woods is proud to provide a choice of apartment floor plans, each designed with your comfort and ease of lifestyle in mind. Our spacious apartments are designed with a living room area, kitchenette, full private bathroom and individually controlled air temperature.

All measurements are approximate, and dimensions may vary. 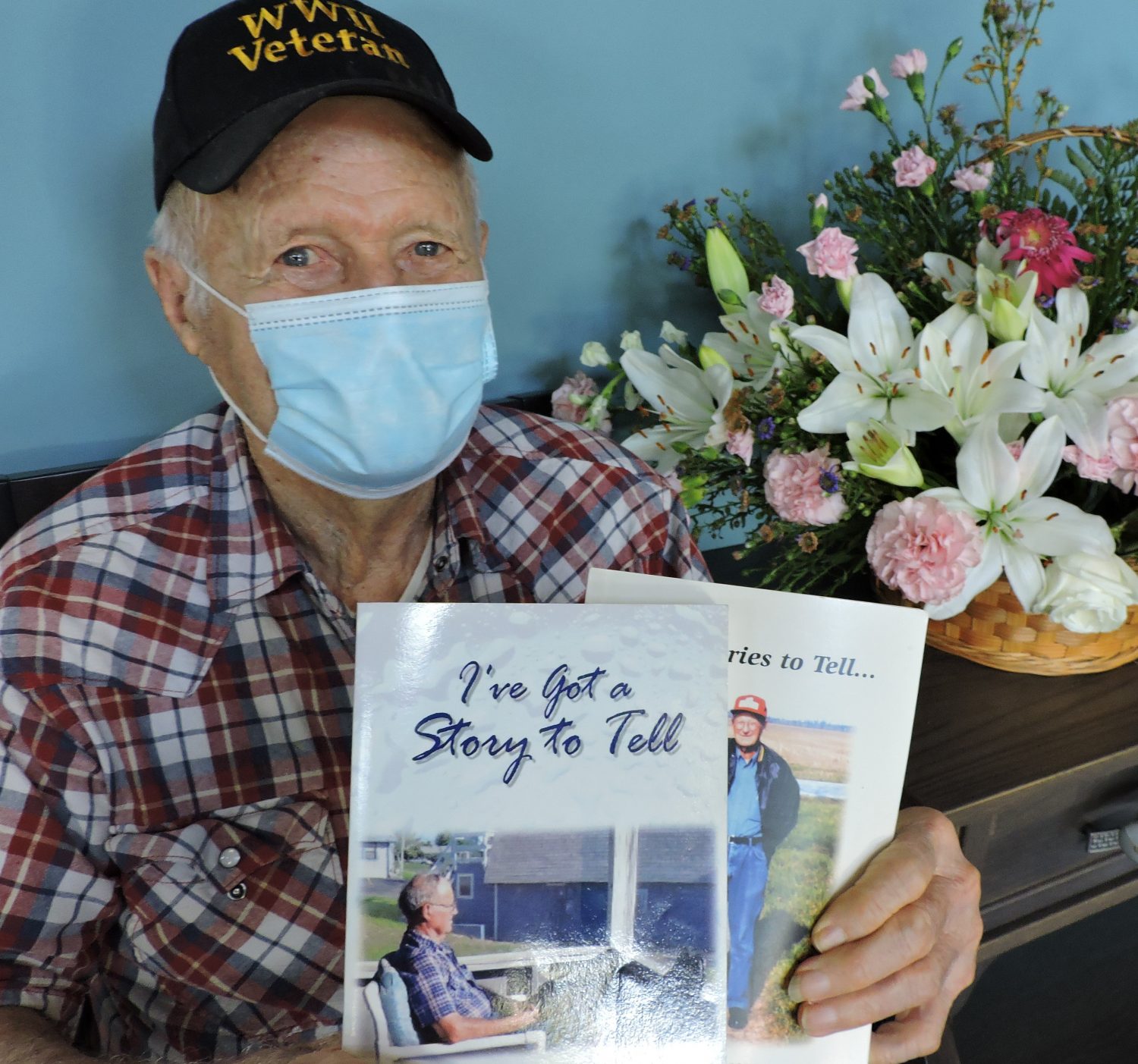 Have We Got A Story To Tell!

We have a story to tell… and we got the idea – literally – from Robert! If you do not know him already, please meet Robert. Many folks have done many things in their lives, but few write about it. Robert did…twice! Robert tells the best stories! So many people loved his stories he put them down in writing. Enjoy the pictures to learn the titles and get the story!

Robert’s books are titled, “I’ve Got a Story to Tell” (ISBN 1410773361) and “More Stories to Tell”. We are proud to have Robert-and his family- as part of our Heritage Woods Family!

Although out of print, Patti Jenkins, our Marketing Director, was able to purchase a pre-owned copy and had a little book signing! Robert was more than happy to sign a copy so everyone here can read his stories!

Family is important to Robert, as you will read in his book. So is his country. Here is a photo of Robert with his dog tags from the Army. Thank you, Robert, and all Veterans for your service!

We appreciate Robert and the fun and joy he brings. This is not new, as his family will tell you… he loves those stories and bringing happiness to others! Even during Bingo, you can see the joy in his eyes… maybe his thinking of his next story!

Pearl’s Story: Where There is Church, There is Home

Pearl loves going out to church on Sunday mornings and attending Bible study at our community on Thursday mornings. She is also a regular for our exercise classes three days a week. She has stuck to this routine for the past seven years. Unfortunately, Pearl fell in her apartment and injured her shoulder. Although she did not require surgery, she lived with her family for a few weeks while she healed. We were overjoyed to see her return.  She, however, had a word for us.  While Pearl was visiting her family, we remodeled the TV lounge where church services and Bible study classes are held. “When are you bringing the piano back,” a disappointed Pearl asked after noticing it was gone.  “It doesn’t feel like church in that room without it.”  What were we to do?

Pearl loved her church, and we loved Pearl, so we put our heads together. We needed new décor for the TV lounge and chapel.  We needed a cross. Pearl’s cross.  So, we contacted her son, NAME, who is a remarkable craftsman. We asked him if he would be interested in making a cross for the room. He was delighted.  He fabricated the cross, using boards from Pearl’s old home. Piecing together the same boards his carpenter dad placed in the home many years ago when NAME was a child, he built Pearl – and Heritage Woods – a beautiful cross.  The cross now hangs in the TV lounge and chapel.  On the back of the cross, he inscribed the words: “To my mother.  Made from material from home.  Donated to Heritage Woods.  10/30/14.”  When asked if the cross helped the room feel more like church, Pearl responded, “That’s a start.”  We all smiled.  Pearl’s cross still blesses the space where she meets for church. 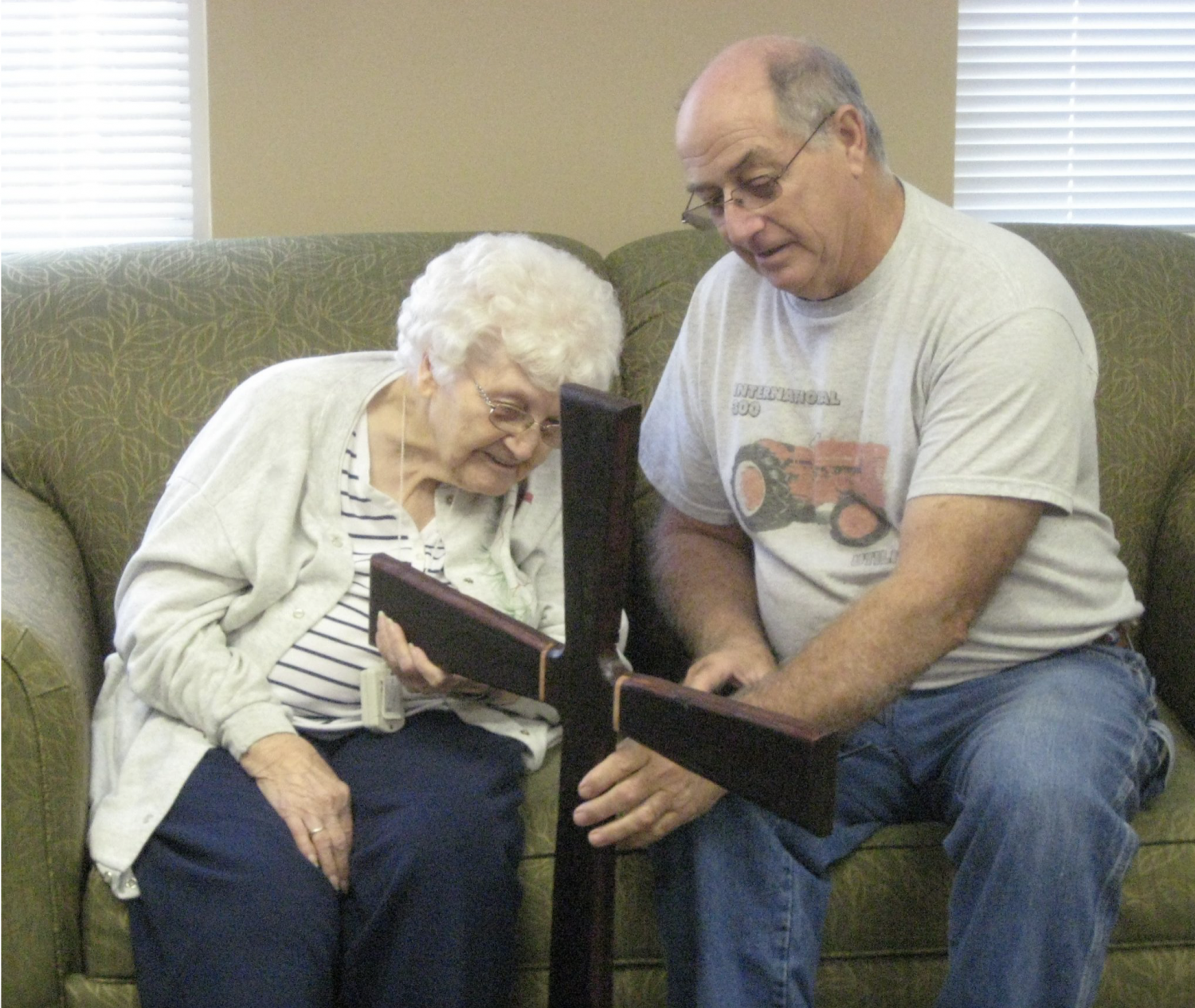 Compassion – that is our specialty!  One extra special resident, Delorah, came to us through her letters.  Her very first contact with us was through a letter indicating her interest in information about our community.  We followed up and kept in touch for many months before Delorah first moved to Heritage Woods.

We began to build a relationship with Delorah, and she began to share her story with us. She told us that many of the people in her life had betrayed her, hurt her and abandoned her.  She no longer had any family or friends whom she felt she could trust or count on.

We received another letter from Delorah, telling us that she had decided to move to Heritage Woods of Flora.  With no one else to help her, the Heritage Woods team rented a U-Haul and drove 35 miles to get Delorah and help her move to her new home.  Unfortunately, it wasn’t long until Delorah’s then assigned POA heard of her move and came to take her back to her old house. Within a few weeks, Delorah sent another letter to Heritage Woods, hoping that we weren’t upset with her and would consider bringing her back to Heritage Woods.  This time it wasn’t only the team at our community; the Gardant Management Solutions staff pitched in as well, taking care of the paperwork, details, and manpower to grant Delorah’s wishes. And finally, Delorah came HOME.  She absolutely trusted our team.  She particularly trusted Sarah, our Business Office Manager, and Lucas, our Administrator.

Her story doesn’t end there. Recently, Delorah needed surgery.  Again, she had no one to depend on to help her communicate with the surgery team or to sit by her side.  Delorah is significantly hearing impaired, so again, our team stepped up to the plate. Lucas took on the role of her liaison and friend.  She expressed her appreciation for his love and compassion more than once during this difficult time.

Delorah’s next request wasn’t quite so critical, but spoke to her heart and her sweet spirit.  Delorah asked if someone could take her picture, so she could send it to her hometown newspaper to announce and celebrate her 98th birthday.  Sarah took her photo, had it developed, and delivered it. Delorah beamed with appreciation for such a small act of kindness.

She continued living at Heritage Woods, celebrating her 100th birthday here.  Random acts of kindness continued as she became more frail.  She always had her favorite orange slices and chocolate near her chair.  She always had plenty of toiletries, a new mattress, assistance with showers and getting dressed, haircuts and more.  She was our family, and we were hers.  We miss Delorah and will always remember her kind spirit and gentle smile.

Dale is younger than most of his neighbors at Heritage Woods.  He is only 68.

Born with cerebral palsy, Dave is used to having help with daily activities. His parents cared for him at home until they passed away.  Then, his siblings picked up that responsibility. When they were no longer able to care for him in their homes, they began searching for other options. At the time, Dale was only 63 – just two years shy of the age he needed to be to live at our community. He moved into a local boarding home, but Dale and his family did not forget their visit at Heritage Woods. When Dale turned 66, they returned to see if we’d consider caring for him.

Dale was excited to have his privacy and to participate in the activities we offer. He was over the moon when a wheelchair accessible apartment became available.  His very own bachelor pad!  Now, he could access his kitchen, bathroom, and closet with very little assistance.  Independence?  Yes.  Dignity?  Absolutely.  And Dale’s social ability and determination were also set free.  He made friends with a group that plays Wii Bowling almost every night. Dale’s neighbors and the staff absolutely love his easy laugh and great sense of humor. We found a tutor to help him with his reading, and now he is working on his GED. Dale has come a long way in the past two years, and we are excited to see what the future holds for him! 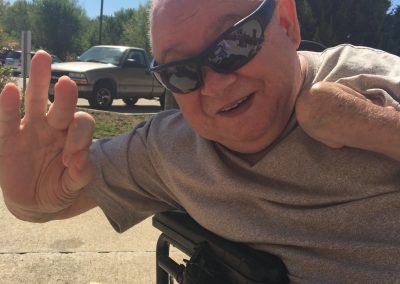 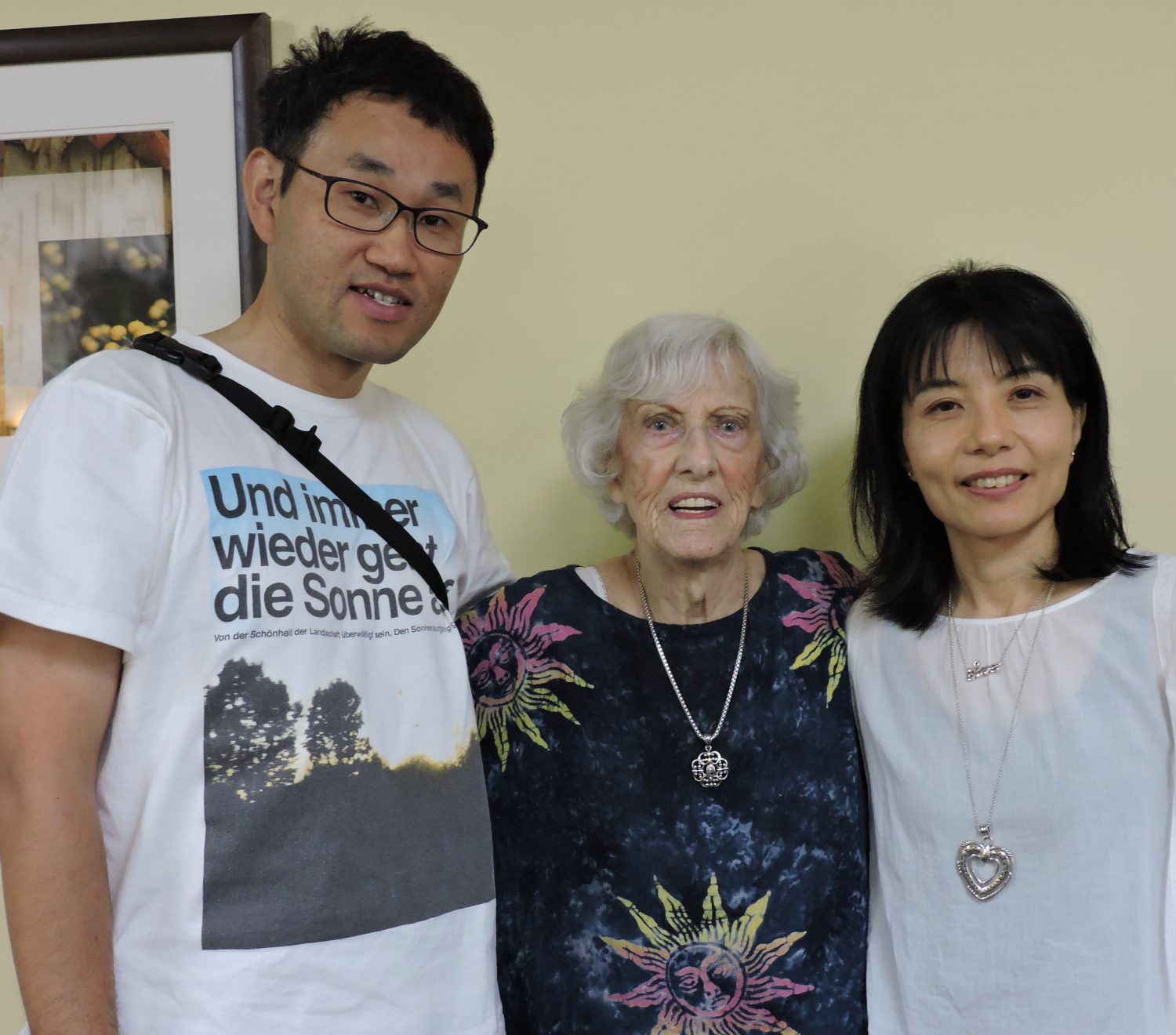 Grandma June moved into her studio apartment at Heritage Woods of Flora last November. Since that time, we have been very excited and pleased with all she has been doing and all the places she has been going! We were concerned as she had just lost her husband and it was a new community and a new place to live. She adjusted quickly due to the caring people who work there–all she has to do is rest and relax–they prepare her meals and snacks, clean her apartment, do her laundry and there is a beauty shop and manicures. She enjoys the church services, the friends she has made and all the wonderful activities.

June’s active lifestyle continues at Heritage Woods; however, her active participation in life did not start here.  June was young when she lost her first husband.  She had young children at home, and they became her priority. At age 72, when June says, “I didn’t know I was old,” she married her second husband, Bill. They were very active, dancing and traveling together at every opportunity.  They continually sought out and learned new styles and genres of dance. Because of their active lifestyle, June is still very healthy and active today at age 97.

On one of their travels to Canada in 1996, June and Bill met Yuki, a traveler from Japan.  Over the few days they spent together, June and Yuki became close friends.  Both women are interested in nutrition, crafts, and history.  “Yuki knows more about the United States than most Americans,” June claims.  For the next 22 years, June and Yuki corresponded with each other primarily through cards and letters they send through the mail.  Occasionally, the two will talk on the phone.

When Yuki learned that June was living at Heritage Woods of Flora, she wanted to know more about her friend’s new home.  She took to her computer to search for the community on Google. June says her friend found that “Heritage Woods of Flora was rated the highest in Southern Illinois.”  Her curiosity peaked, Yuki and her new husband, Ryota, planned a trip to visit June at her new home in Flora, Illinois. Proud of her new home at Heritage Woods, June quickly began planning for Yuki’s visit, letting local friends and her family know she would have a special visitor and was in search of local places of interest they could tour together.

When June opened her apartment door and saw her friends smiling there, she was overwhelmed with emotion.  They enjoyed their three-day visit together, eating with friends and family at the nearby Pizza Hut, touring the local Wal-Mart, and just visiting across the dinner table or making origami swans in June’s apartment at Heritage Woods.  June’s new home did not disappoint. Yuki and Ryota were impressed with the food and the beautiful, homelike atmosphere of Heritage Woods.

The friends will continue to correspond with renewed interest, new stories to tell, and new questions to ask.  And who knows? Perhaps there will be future trips across the ocean for old friends to connect in new ways.