The company has been an example for the LeadingAge Illinois Legislative Partners in Quality Program, which encourages assisted living communities to reach out to local, state and national lawmakers to discuss the benefits of the Illinois Supportive Living Program and other issues that are important to residents.

During a recent awards ceremony, Gardant dominated the outreach category with 19 of the 53 communities recognized being ones Gardant manages. 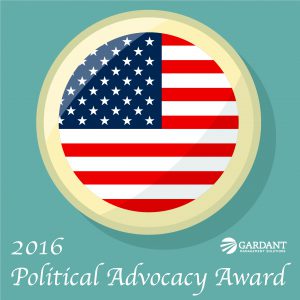 The 2016 award recipients were: 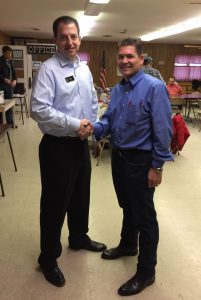 The community works diligently to keep politicians in its district involved and educated about the work they are able to do through the Illinois Supportive Living Program and under Gardant’s management.

Their political visits this year included:

The community has hosted and attended several events with political leaders, including:

The community made a point of reaching out to state and local lawmakers over the past year, including

Rep. Robert Pritchard
Rep. Pritchard visited the community in May.  He was able to take a tour and talk to residents about the importance of the Supportive Living Program. Residents and staff spoke with him about why it was important to vote against a proposal that would have increased the score that determines whether prospective residents need care at supportive living communities.

Mayor John Rey- City of DeKalb
Mayor Rey visited Heritage Woods a few times this year.  The community hosted a DeKalb Chamber of Commerce after-hours event in May where the mayor toured the building and spoke with staff about the level of care residents receive.  Mayor Rey was also invited to attend the first responders breakfast during Supportive Living Week.

Eric Johnson – Supervisor, DeKalb Township
Eric also attended the Chamber of Commerce event in May. He toured Heritage Woods and learned about the importance of the supportive living program. Eric, who also spends a lot of time in Springfield, has become an advocate for supportive living.

DeKalb Chamber of Commerce
Heritage Woods of DeKalb has been an active member of the chamber for several years.  Josh Waddle, the community’s marketing director, is a chamber ambassador and member of the public policy committee, which focuses on educating members on city, county, and state policy that directly affects local businesses. Each month, the ambassadors meet to network with other ambassadors, and Josh is able to discuss Heritage Woods with the group.

Throughout the years, Gardant Management Solutions has received several awards for its political advocacy, including a 2016 Best of the Best Consumer Choice Award, which recognizes innovative programs and services that are creating the future of senior living. Gardant’s Speaking Out for Supportive Living Program is designed to protect consumer choice through multidisciplinary, year-round political advocacy for the Illinois Supportive Living program.