Are Two or More Minds Really Better Than One?

Is the adage that two heads are better than one correct? The expression, which apparently dates back to the mid-1500s, is based on the idea that people working together in a group or as a team are more likely to come to a better decision than individuals working on their own.

The question arose in my mind a couple of weeks ago as I listened in on a discussion that the Diversity, Equity, and Inclusion team at Gardant was having.

As a company, Gardant operates 57 communities that feature senior living, assisted living and memory care apartments. Our primary focus is on providing the residents of the communities we operate with the Love, Compassion and Dignity they so richly deserve and the personal assistance and support services they need to achieve and maintain as much independence as possible for as long as possible.

The locations are diverse. We operate communities in the inner city, surrounding suburbs, mid-size cities, and small towns and rural areas from the far northern to the far southern reaches of Illinois and Indiana. We also operate three communities in the Mid-Atlantic States.

Sizes range from 32 to more than 200 apartments.

The Diversity, Equity and Inclusion team was formed to look at steps Gardant can take to best ensure we have a culture of inclusion, belonging and equity within the management company and the communities we operate.

The team asked me to listen in on their discussion because they wanted to share their insights about what it was like for individuals who represented diverse backgrounds, cultures, and experiences to come together to work as a team.

Here is what I found so enlightening as I listened to the discussion team members were having:

Team members said they recognized early on that more diversity of team members of was needed, so they took the initiative to recruit others to join the team. They wanted to ensure that there was a balance of team members from the management company and from the communities we operate. Given the diversity of locales in which the communities we operate are located, they wanted the team to include members that represented a diversity of locations. Given that a much higher percentage of the workforce in senior living is female, they wanted to make sure the team had gender diversity.

They talked about what it was like to be given a blank canvas with the challenge to create their own masterpiece picture of Diversity, Equity and Inclusion rather than being told what to do and how to go about doing it. Team members used words such a “little daunting” and at the same time “energizing.”

They talked about how the team is operating with the idea of shared leadership. The responsibility for leading a team meeting and for taking minutes, for instance, rotates among the team members so no one person is responsible.

They mentioned how they are looking at diversity, inclusion, and equity from the standpoint of a variety of factors such as age, gender, racial group and salaried versus hourly employees.

This comment, in particular, is what sparked my question about whether two or more heads are really better than one. Isn’t it highly dependent on the level of diversity among the heads? Will the outcome really be better if all of the heads are virtual clones of each other?

What do you think? 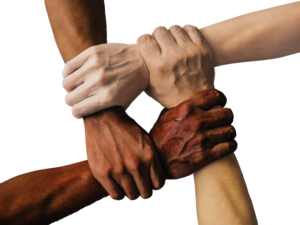