At Heritage Woods of Rockford, your affordable assisted lifestyle community in Rockford, Illinois, your new home awaits you

Heritage Woods of Rockford is proud to provide a choice of apartment floor plans, each designed with your comfort and ease of lifestyle in mind. Our spacious apartments are designed with a living room area, kitchenette, full private bathroom and individually controlled air temperature. 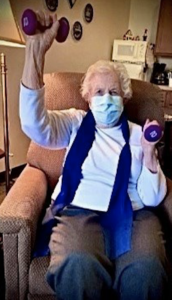 Meet Mabel, the 95 years old wife and mother of 2 from Tomahawk, WI. After high school, Mabel started working as an accountant for Ben Franklin Crafts when she met her husband, who was born and raised in the Rockford, IL area. Through some mutual friends.

Mabel took some time from her accounting work when she had her two daughters but went back part-time as an accountant for a local furniture factory when they were in grade school. When they were in high school, she went to full-time.

Unfortunately, Mabel lost her husband in 1980, but that didn’t stop Mabel for being able. She worked all the way up to 65 when she retired from the furniture factory (that went out of business shortly after, talk about impeccable timing!)

It may sound like Mabel has had a standard life but don’t let her love of puzzles and ability to knit anything throw you, Mabel has some interesting tales to tell! Mabel’s daughter and son-in-law lived and worked in Hollywood, CA, and so Mabel has had the opportunity to meet some pretty hot ticket celebrities like Johnny Carson and Pa Sajak, but for me, the REAL showstopper, is the fact she was actually ON Richard Simmons daily talk show working out with a fitness icon while sporting a pink track suit!

I searched high and low through decades of archives looking for the tape but turned up empty handed.

After her retirement, and prior to moving in to Heritage Woods of Rockford, Mabel found purpose in leading the water aerobics class at the YMCA for 12 years, which furthered her belief in “Sink or Swim,” proving you’re never too ‘old’ to be healthy and active.

September 2019 Mabel moved to Heritage Woods of Rockford and from then on has refused to use the pandemic as an excuse to sit on the couch and eat Bon Bons. Mable started out in the library, “The library really needed a lot of help, I didn’t even ask, I just took over the library,” she states.

After almost a year of being stuck in her room die to unforeseeable COVID related circumstances, they started allowing very small groups to gather again. Since then, Mabel has taken it upon herself to be the BINGO wrangler, the portable librarian, and her most recent job adventure is the morning exercise routine instructor, providing you’re never “too old” to keep active!

PEACH of a Gal: Helen Celebrates Birthday with Drive-By Parade

On Saturday, April 25, 2020, approximately 140 cars paraded by Heritage Woods of Rockford, an affordable assisted lifestyle community managed by Gardant Management Solutions, to pay tribute to one of the original Rockford Peaches. Helen “Sis” Waddell had a key role for the women’s baseball team and later in the movie A League of Their Own.

Helen played for the Rockford Peaches in the All-American Girls Professional Baseball League in 1950 and 1951. She is a local celebrity who has called Rockford, IL her home since her professional baseball career ended.

Helen turned 90 years old on Friday, April 24. In tribute, her family spearheaded a campaign to honor this local icon with a Birthday Drive-By Parade. The parade, hosted at Heritage Woods of Rockford, received attention from local news stations as well.

Neil Wyatt, Helen’s son, did not expect the huge turnout. It ended up being about a 40-minute parade in celebration of his mother.

There were hoots, hollers, honks and lots of fanfare for a very deserving PEACH of a gal! 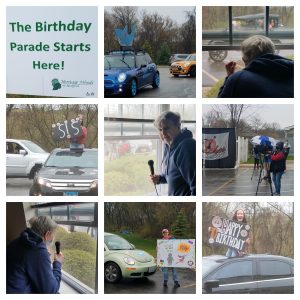 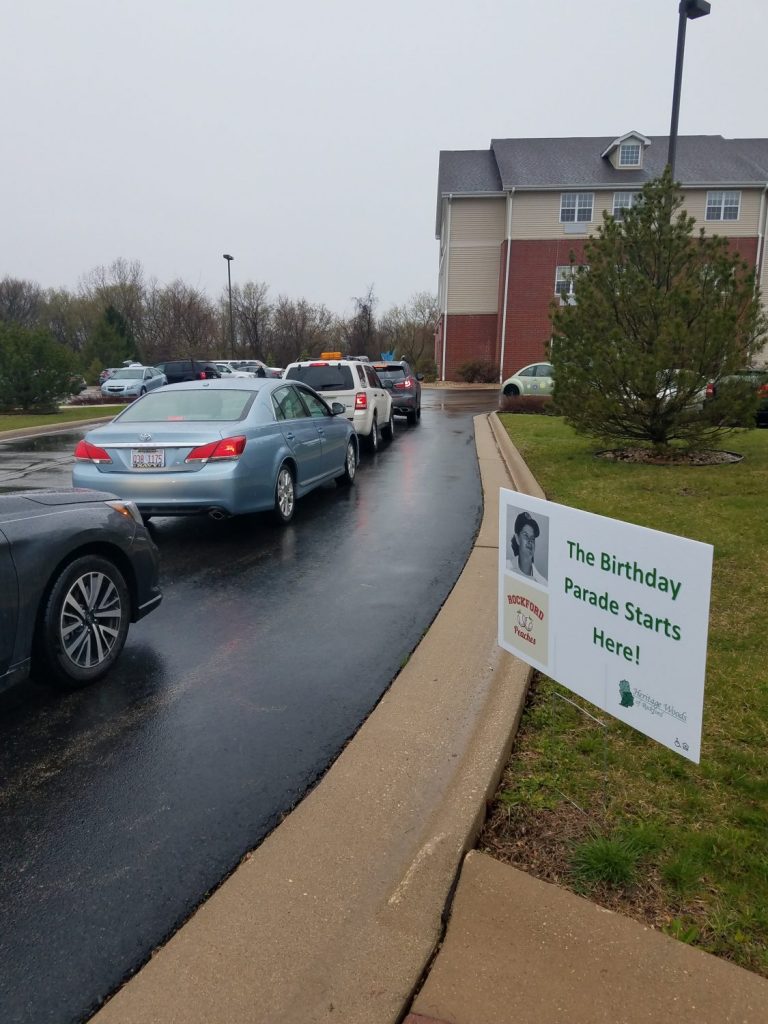 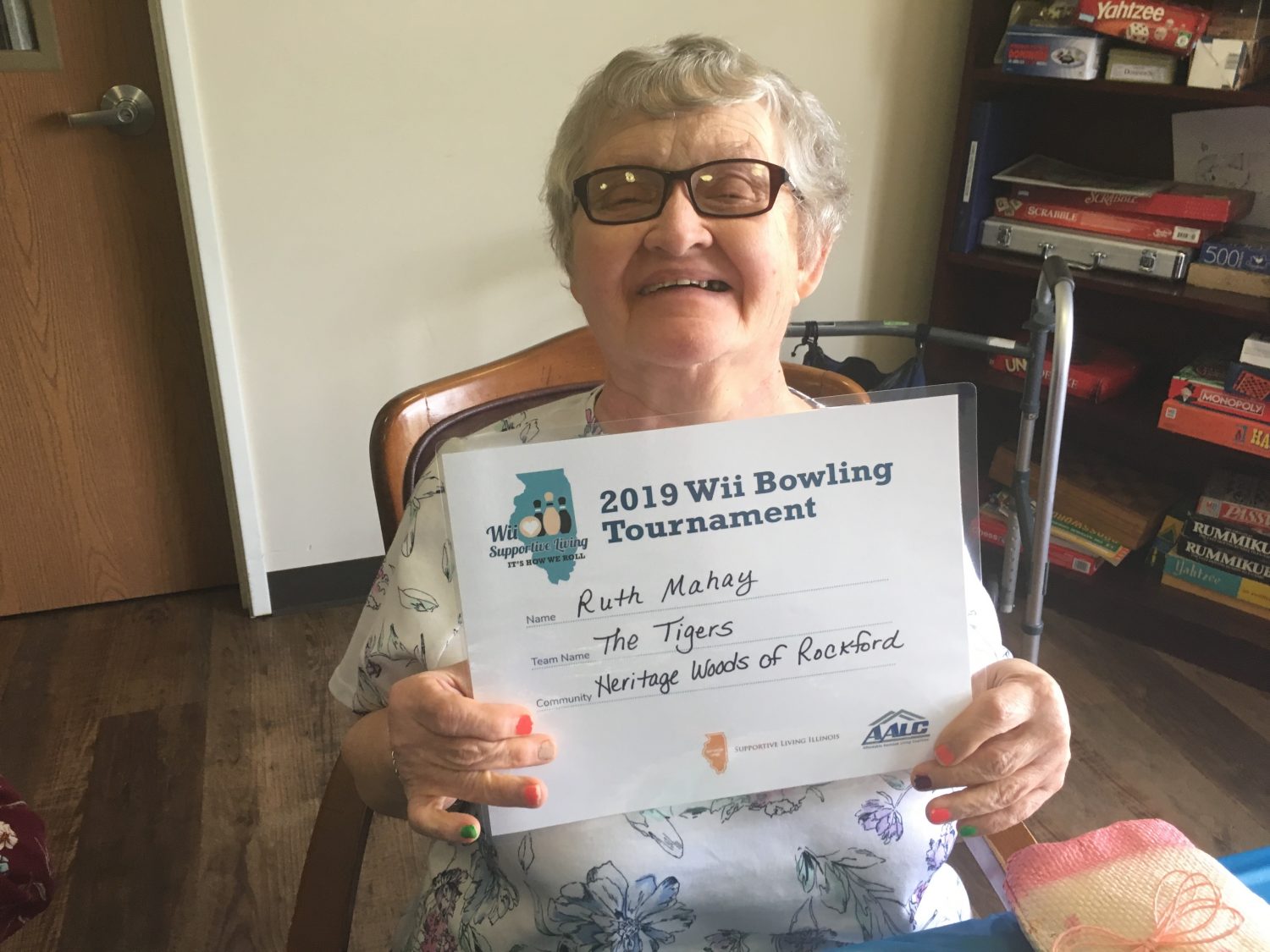 Ruth Mahay was born into a loving home, but from the beginning, she had some health issues, and life would always be a bit of a struggle for her.

Due to those issues, Ruth couldn’t live on her own. She was able to work and got a job in a toy factory for 19 years. When her mother suffered from a stroke and had to move into a nursing home, Ruth would need a new home.  She moved in with Pat, her younger sister.

Always one to stay busy, Ruth started volunteering and working with children at the Harlem Community Center. She enjoyed the job, and her new home was so close that she was able to walk there. Ruth also worked as a school lunch aide. Not being one to let anything define her, she got involved in the Special Olympics, too, earning many ribbons and medals over the years.

“This would be a perfect fit,” she thought, wanting to see Ruth happily engaged with others again.

Seven years ago, Ruth walked through the front doors of Heritage Woods. At first, she was scared and nervous, but she quickly adjusted and was so happy to be part of a community. For the first time, she had her own home, and she has gained some independence. Her sister and niece decorated her new home beautifully, and Ruth was so excited to show it to all her new friends and neighbors — and even to potential residents who come to tour!

As far as television, that has taken a back seat because she is so busy with all of the activities that Heritage Woods has to offer. Ruth attends nearly every activity and goes on most of our outings. She is an Ambassador (part of our welcoming committee) and a Baking Buddy (our group that bakes and raises money for local charities). She has been a part of the Affordable Assistant Living Coalition’s Wii Bowling Competition for seven  years as well, so she is one busy lady — to say the least.

If someone is touring our community, Ruth is anxious to tell them how much she loves living here and all her reasons why we have helped her become a social butterfly again!

Gardant Management Solutions, the company that manages Heritage Woods of Rockford, is a mission-driven company based in Bourbonnais, Illinois.