I had the opportunity last week to participate in a webcast hosted by the American Society on Aging. The focus was on a recently released report entitled “The Four Pillars of the New Retirement” and the impact that the results highlighted in the report may have on aging and aging services providers.

The report highlights the findings of a major Edward Jones and AgeWave research project.

The research project entailed the examination of more than 100 North American studies, articles, and publications; interviews with experts; on-line forums; focus groups; and a survey conducted by the Harris Organization of 9,000 individuals 18 years of age and older in the United States and Canada. The project looked at five generations – the Silent Generation, Baby Boomers, Gen Xers, Millennials and Gen Zs.

The speakers were Ken Dychtwald, Co-Founder and CEO of AgeWave, and Ken Cella, Principal of Edward Jones’ Client Strategies Group.

When you look at history, Dychtwald noted, the idea of an aging society is relatively new. For 99% of human history, scientists say, the average life expectancy at birth was under 18 years of age. When our U.S. Constitution was signed, life expectancy in the United States was 37 and the median age was 16.

No longer is retirement about the end of work and a time to relax and wind down.

People are now seeing retirement as a whole new chapter in life. It is about new choices, new challenges, new purposes, new possibilities, and freedom from as well as the freedom to do things like pursue new interests, volunteer, play with the grandchildren or sleep in if you would like to sleep in, Dychtwald said.

The study looked at the four pillars for living well in retirement – Health, Family, Purpose and Finances – as well as the impact of COVID-19.

One of the findings that surprised Dychtwald is that older adults appear to be coping better with the impact of the coronavirus pandemic than younger generations, particularly older adults with strong social connections or who have families who look after or take care of them. Nearly twice as many Silent Generation respondents (39%) said they are doing very well in coping with the pandemic than Gen Z respondents (21%).

When asked if they have suffered any decline in their mental health since the onset of the pandemic, older adults also seem to be fairing much better than younger generations. Eight percent of Silent Generation respondents and 15% of Boomers indicated that they have suffered a decline in their mental health versus 25% of Gen Xers; 27% of Millennials; and 37% of those in Gen Z.

An upside of aging might be greater resilience and mental fortitude, Dychtwald opined.

When looking at the Four Pillars that impact the quality of life, here is what most caught my attention in the webcast and the report:

▪ More than 60% of the respondents indicated that the coronavirus pandemic has had no impact on their plans to retire. Nearly 30% said they plan to delay retirement if they are able to continue working by, on average, 3½ years. Ten percent plan to retire sooner because there are more important things in life than working.

▪ Two-thirds of the respondents say the pandemic has brought families closer together.

▪ Healthwise, the biggest fear expressed by retirees was not cancer, the coronavirus, stroke, or heart disease. Their biggest fear is Alzheimer’s disease and related dementia.

▪ Four out of five individuals 65+ have at least one chronic medical condition.

▪ Unfortunately, older adults in the United States spend an average of 10 years in ill health.

▪ 93% of retirees say it is never too late to improve your health. Yet only a little more than half of the retirees who responded to the survey say they maintain a healthy diet or exercise regularly.

▪ The definition of family has broadened, especially among those in the younger generations. It has expanded beyond those related by blood, marriage, or adoption to those a person loves and cares for.

▪ More than seven out of ten respondents cited being a burden on their family as one of their top fears.

▪ Retirees say their greatest source of purpose is spending time with loved ones.

▪ Retirees value creating lasting memories over giving gifts or money. They want to share their values, stories, and life lessons.

▪ Less than 25% of today’s retirees volunteer their time.

▪ Nine out of ten respondents say there should be more ways for retirees to use their talents and knowledge to benefit the community in which they live and society as a whole.

▪ The biggest financial worry about retirement is the cost of health care and long-term care.

▪ The projected costs for out-of-pocket health care expenses and long-term care during retirement is approaching a half a million dollars.

In his concluding remarks during the webcast, Dychtwald made two observations.

The first was that while a sizeable percentage of retirees are doing well, 16% of the retirees rated their quality of life as fair or poor. The percentage translates into nearly 10 million people in the United States. More attention, more regard and more resources are needed for those who are struggling, he said.

The second is that there is a lot of focus on making people want to be youthful. He thinks what people really want is to be useful.

He believes the image of only seeing older adults as being needy may be shifting. While a percentage are struggling, some mightily, he also sees older adults as an untapped resource of individuals who are able and want to give.

What are your thoughts? 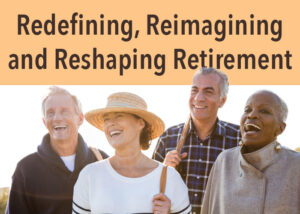